One of my bestest friends has tiny tot.  And what’s cuter than dressing up tiny tots?  Nothing.  The answer is nothing.  This Halloween, my friend, her hubby, and her tiny tot dressed up as The Three Bears.  I know, already sounds too cute.  Here in the Pacific Northwest, it’s already pretty chilly and damp by Halloween, so it’s only practical to have a warm costume.  Enter, the bear hood. 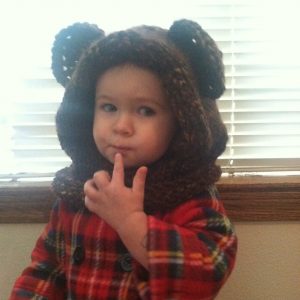 Can you even stand it?  If so, you’re a stronger person than me.  I used a super bulky, machine washable, synthetic/wool blend – perfect for tiny tots and baby bears alike.  I started at the bottom with some reverse stockinette, went to regular stockinette, then started the face opening.  There’s some garter stitch edging, though it sort of curled under.  But I think that was a good thing because if it hadn’t curled, it would have swallowed up her little face!  I ended with a three needle bind-off, which gave excellent structure to the pointed back end. 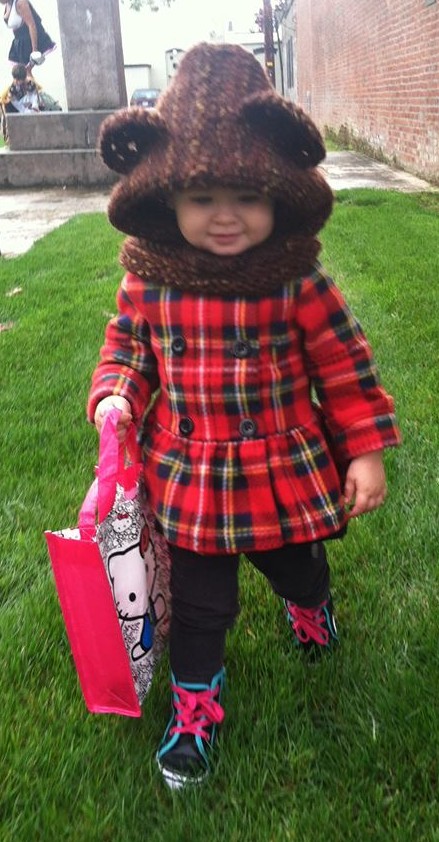 The ears are crocheted, then stitched into place.  They’re a little large, but the tiny tot wasn’t interested in test-driving the hood before the final touches were made, so I estimated.  Apparently I think tiny tots are giant.  I intended to line the ears with some felt, too, but Halloween is a creepy sort of holiday, and it creeped right up on my calendar completely unannounced. 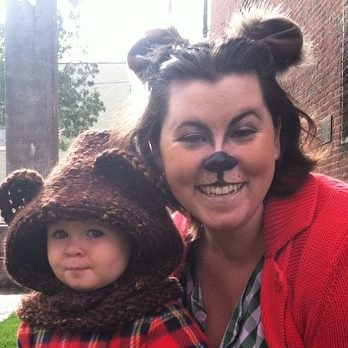 All in all…they’re pretty much the cutest clan of bears I’ve ever seen!